Sidekicked is the pilot episode of the Earthworm Jim animated television series.

After one monstrous transformation too many, Earthworm Jim fires Peter Puppy and tries out a string of new sidekicks when Princess What's-Her-Name is captured once again by Psy-Crow.

Earthworm Jim and Peter Puppy are precariously hanging from a cliff on The Planet of Unusually Tall Things. Unfortunately, they are also being hunted by Professor Monkey-For-A-Head in a millipede-like mecha which generates massive electricity bolts by rubbing its feet together and stomping. The simian-headed mad professor was the original creator of Earthworm Jim's super suit, and wants to destroy Jim and reclaim his property. However, Jim detaches one of the hands from his super suit, and it floats off and punches it's creator into unconsciousness. Jim flies Peter to safety on his Pocket Rocket, and after landing the hand comes back down to rejoin with the suit. Jim then accidentally steps on Peter's foot, causing a massive and monstrous transformation in Peter. The professor wakes up and sees Peter mauling Jim's super suit like a rag doll, and the professor decides to flee. In the brawl, Jim sticks his head out, saying that he'd really like the opening theme song to play.

After the opening credits, Jim and Peter are seen at the their hideout in Terlawk. Jim is exasperated at yet another of Peter's untimely monster transformations, which as well as being dangerous for Jim, have also enabled numerous villains to escape. Despite the crying and pleading of the sensitive puppy, Jim tells Peter that he is fired, and that he needs a more reliable sidekick. Before he leaves on his next adventure, Jim leaves some garbage for Peter to play with, his favorite, but Peter says that he is so sad, even garbage has lost its subtle charm.

Meanwhile, the bounty hunter Psy-Crow, "Scourge of the Space Lanes", travels to the evil planet Insectika to answer a summons from the planet's monarch, Queen Slug-for-a-Butt. The Queen tells Psy-Crow that she has discovered the location of her more human-like sister (an "Insectik-ette"), Princess What's-Her-Name, who has been leading a rebellion. The Queen knows that Earthworm Jim is madly in love with the Princess, and so orders Psy-Crow to capture her and ransom her for Jim's super suit, which was originally intended for the Queen, and which the Queen desires more than anything else in the Universe.

Psy-Crow gladly accepts the mission, and a very short time later, Jim receives the ransom note through the communicator on his super suit. The communication informs Jim that the Princess is in the "one place where even he would dare not go". Jim supposes this means the Swamp of Appalling Peril, and decides this is the right time to get a new sidekick.

Fortunately for Jim, there is a "Hero Hutch" in the Universe with heroes-for-hire, which is having a sale on sidekicks, and Jim travels there. Unfortunately for Jim, it is also a discount superhero store, with heroes such as "Whooping Cough Boy", a geriatric whose power is strong coughs; "Mr Forehead Vein" whose forehead veins are like arms; and "Zantor", master of the flying toupée, who has soiled his tights. Jim thinks that they are all amazing, and hires "A Shadow" (not The Shadow, as he repeatedly points out), a frail man dressed like a witch, whose power is making shadow puppets with his hands, including a brilliant shadow version of Jim.

At the evil tower in the Swamp of Appalling Peril, Jim and A Shadow discover that the Princess is not there, and a trap has been laid by Psy-Crow - a gang of flesh-eating, demonic alligators led by the Momma Gator. A Shadow stands up to them, but is quickly kicked with some force into a rock wall, causing Jim to wonder if he can get his deposit back. Momma Gator then eats Jim whole, super suit and all, causing the Narrator to wonder if this is the end of Jim.

The episode then transitions into a secondary plot-line for a few minutes, and we join yet another villain, Evil the Cat, who is searching Terlawk for Jim's hideout. In the meantime, Evil the Cat has spotted the most innocent and pure being in the Universe - a good-natured, ginger-haired boy - who Evil immediately decides he needs to destroy. As the boy picks up some litter to put in the bin, Evil coughs up an acid fur-ball to spit at him. However, the acid fur-ball bounces off the dustbin lid and back at Evil the Cat, melting the fur off him and causing to exclaim that it is only a "minor set back". Evil then gets out his spinning, razor-sharp claws, and begins chasing after the boy but is hit by traffic which flings the cat into a butchery, and after which Evil he emerges with sausages instead of a body. Again, Evil exclaims that it merely a minor set back. Evil the Cat then goes away and fixes himself, and afterwards tracks the boy down to his house, turning up with a massive ray gun he has built. However, the gun misfires, and the boy's mother spots Evil, and thinking he is adorable, immediately adopts him. She puts Evil into a box intending to take him to the veterinarians, but accidentally leaves the box at a fireworks factory she stopped off at first. Scratching at the box with his claws to get out, the sparks cause a gigantic explosion which launches Evil into orbit, and then into a nearby star. He is heard exclaiming, once again, that it is merely a minor set back.

At the hideout, Peter Puppy is a deep depression, discussing his feelings with Snott, who replies merely with gurgling sounds. Snott watches on in smiling confusion as Peter gets on an ballerina dress and expresses his sad feeling through "interpretive dance". As Peter slams the table up and down, Peter cries that he wants his job back as Jim's sidekick. This earns a round of clapping applause from Snott. Peter decides he will win back Jim's approval, resolving to become his apprentice again.

Back in the Swamp of Appalling Peril, Earthworm Jim manages to fight his way out of Momma Gator's stomach, first beating her with a tree from within her body. Going into the Evil Tower, Jim believes he has seen his "sweet sausage of Rapture", but it is fact another mutant alligator and another trap from Psy-Crow. Continuing his quest alone, Jim consults a book, "An Idiot's Guide to The Most Hideously Dangerous Places in the Galaxy", to look for further places where Psy-Crow may be hiding the Princess.

Jim then goes to get a new sidekick, "Whoopee Cushion Man", and searches The Mountain of Nameless Dread. However, after reaching the summit and finding nothing, Jim's new sidekick falls down the mountain, making flatulent noises as he repeatedly falls into the mountainside. Jim exclaims that he told him to watch his step, despite the fact he had his eyes covered, and Jim pushed him up there. Jim then tries out "Captain Cabbage" and searches The Planet of Enormous Hammers, but Captain Cabbage is hit by one of the hammers, causing Jim to mutter "Eww. Coleslaw... ". Jim goes on alone, only to discover the next Evil Tower is full of princesses, but they are all old crones and not his beloved.

Jim returns to Terlawk to consult his Idiot Guide again, ignoring Peter's pleas to join him. Without Jim's knowledge, Peter hides within Jim's Pocket Rocket as Jim leaves to go pick up another sidekick from the Hero Hutch. This time, Jim hires Turns-His-Eyes-Inside-Out Boy and goes to the Boulevard of Acute Discomfort, a place replete with murderers, black marketeers, and yellow-suited crows.

Meanwhile, Princess What's-Her-Name escapes from her captor Psy-Crow, beating him up and squishing his head into his glass bubble helmet. However, she unintentionally throws Psy-Crow into his armored suit, the Ex-Crow-Skeleton, with which he is finally able to subdue her. Psy-Crow then puts her in an "Impenetrite" cell, and tells her that he is calling in the ransom... Jim's Super Suit, to be delivered to him in twenty minutes.

Earthworm Jim and Turns-His-Eyes-Inside-Out Boy turn up at the skid row-like Boulevard of Acute Discomfort. There is no Evil Tower, only a seedy hotel. Jim and his new sidekick interrogate the shady nightwatchman and find out where Psy-Crow is hiding the Princess. They burst into the cell room, and Turns-His-Eyes-Inside-Out Boy uses his "power", which actually does nothing. Psy-Crow pretends that this "power" actually works, then uses the Ex-Crow-Skeleton to stomp Jim's new sidekick into the ground. Jim worries out loud about the sidekick health plan, then goes to "Plan A: Senseless Violence", pulling out his Plasma Blaster and letting rip. However, it does not harm Psy-Crow's armor, and Jim begins to run away, accidentally running into a wall and knocking himself out.

As Psy-Crow is about to smite Jim and take the Super Suit, Peter appears from Jim's Pocket Rocket, warning him not to hurt the worm of he'll get... angry. Psy-Crow mocks Peter, who then mutates into the hideous Monster Peter, and mauls Psy-Crow, destroying the Ex-Crow-Skeleton. Jim intervenes before Peter rips him to shreds, but not before losing the leg of the Super Suit, and Jim throws Psy-Crow into one of the cells, locking it. When Peter calms down and returns Jim's leg, Jim apologizes to Peter, telling him that he is the best sidekick ever and he is re-hired. Jim then opens up the "Impenetrite" cell, only to find that the Princess is already escaped. She taps Jim on the shoulder, and Jim is elated to see her, before a cow lands on her, cutting his victory monologue short. 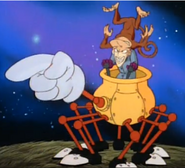 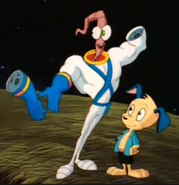 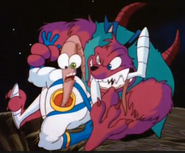 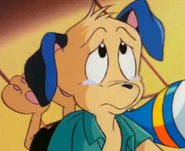 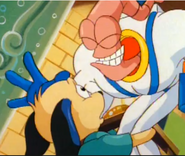 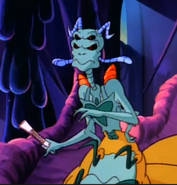 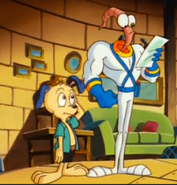 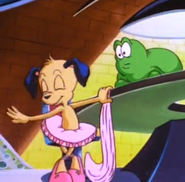 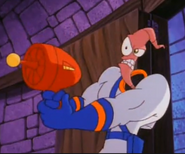 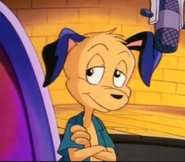 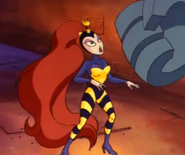 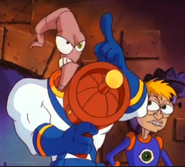 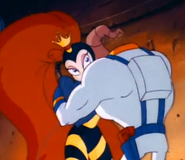 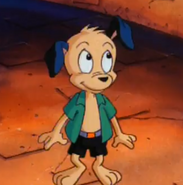 Add a photo to this gallery

Retrieved from "https://earthwormjim.fandom.com/wiki/Sidekicked?oldid=7784"
Community content is available under CC-BY-SA unless otherwise noted.