The Evil Queen Pulsating, Bloated, Festering, Sweaty, Pus-filled, Malformed, Slug-for-a-Butt (Queen Slug-for-a-Butt for short) is the final foe that Jim faces in the video game Earthworm Jim. She is the twin sister (mother in the graphic novel "Launch the Cow) of Princess What's-Her-Name, though she clearly does not resemble her in any way. Queen Slug-for-a-Butt more closely resembles a large queen insect, especially a queen termite. She is the parent, monarch and commander of the Insectoids, all of whom are generated from her ovipositor.

Slug-for-a-Butt was planning on using the ultra-high-tech-indestructible-super-space-cyber-suit to conquer the universe. (The fact she once fit in the suit is a marvel.) Thus, she intends to destroy Jim, and reclaim the suit. She is the boss of Buttville, the final level, and the player must first defeat her butt before fighting the Queen herself. She was later the penultimate boss in Earthworm Jim: Menace 2 the Galaxy.

In the Earthworm Jim television series the Queen is the ruler of the planet Insectika and is voiced by Andrea Martin. She is easily Jim's most evil and competent enemy, and, as in the game, attempts to reclaim the suit so she may rule the universe. Unlike many of the villains, who are obsessed with destroying Jim, the Queen sees him more as a pest she has yet to squash and usually prefers to send less threatening adversaries like Psy-Crow. She only deals with Jim herself when she tries to get the suit back. Otherwise, she prefers other schemes, such as turning people into chickens and hypnotizing Santa Claus. She also loathes anything nice and good, such as chocolate.

In another episode, she is exiled from Insecktica through a coup staged by Psy-Crow and Professor Monkey-For-A-Head, but manages to live the normal civilian life on Earth and demands that everyone call her Lucy. Ironically, this is the only episode where she actually wears the super suit, given to her by Jim himself in order to help her retake her homeworld, though she reluctantly gives it back at the end of the episode.

As the Super Suit was originally made to be worn by the queen by Professor Monkey-For-A-Head (forgetting entirely that the queen has a gigantic larval posterior when designing it in the form of a muscular human man), it increases the Queen's powers dramatically - so much so that when she used her scepter blasts on an indestructible war machine while wearing the suit the machine was destroyed entirely, whereas without the suit her blasts did nothing.

Queen Slug-for-a-Butt is a brutal and sinister tyrant who rules the planet Insectica with an iron fist. She not only rules Insectica but an outer ring of smaller planets and moons that surround it. She feels that it is her duty for the empire of Insectica to spread further than its own Galaxy. Never satisfied, she is determined in spreading her evil ways wherever her kind might go. Even If it means to the farthest reaches of the universe.

Loyal followers are brain-washed to love and respect her iron rule. With long black horns and flashing red eyes, she has used her power over the inhabitants of the Insect Empire to hold the view that she is the one and rightful ruler to the throne.

She also holds a fierce hatred for her twin sister Princess What's-her-Name. She always mistreated her sister and kept her into a life of captive exile because of the young queen's lust for power.

Her most impressive weapon is her sceptre which has been passed through centuries of the royal bloodline. The sceptre has the power that can only be used by those of royal Insectican blood. It is said to have the power to destroy and to heal. The queen prefers its destructive qualities...wielding its strange energy she can lay waste to anything she pleases! 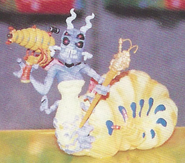 Old Photo of a Queen Slug-for-a-Butt Toy made by the Playmates Toy Co.