Puppy Love is a recurring level featured in Earthworm Jim 2. Throughout the course of the game, Jim will encounter this level three different times, with four rounds each time.

To accomplish this, Jim uses what's known as the "marshmallow o' love" to bounce the puppies safely to Peter on the opposite side of the level. Psy-Crow will eventually throw out a bomb, presumably by mistake, and when Jim bounces the bomb over to Peter, he throws it at Psy-Crow to deal damage to him, effectively ending a round.

There are four rounds in total during each appearance of the level, and each level, as well as each round, get progressively more challenging.

The Puppy Love levels are notable for the impressive line scrolling found in the Sega Genesis/Mega Drive and Nintendo Super Nintendo Entertainment System versions of the game. It allows the level to appear as if it's taking place on a three-dimensional rendered background, when in reality, it was achieved through the use of innovative scrolling techniques.

"Puppy Love" (with music by Peter's Pound and Mary)

Psy-Crow has taken the Princess to Peter Puppy's world and now is holding Peter's puppies hostage, all 600 of them! Cornering Psy-Crow in an abandoned spaceport control tower on the edge of Nowhere City, Jim has to stop Psy-Crow from throwing the helpless puppies out the window and thus getting rid of any evidence! Use the giant marshmallow o' love to get the puppies back to Peter. Drop a few and Peter might get angry. And you know that getting Peter angry is like having a 900 pound weasel stuffed down your shorts! Yikes!

ProTip: Always go for the first puppy thrown. Follow the sequence and you'll get them there safely. Watch carefully where the puppies land, knowing where to position yourself is half the battle."[1] 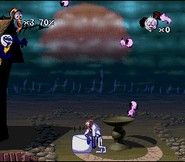 Peter Puppy throwing a bomb back at Psy-Crow (Genesis version)

Jim jumping to save the puppies (Sony PlayStation port)

Game music composer Tommy Tallarico based the music of this level on fast-paced Italian folk music.

The game's manual also credited "Peter's Pound and Mary" on the musical theme.[3]

Retrieved from "https://earthwormjim.fandom.com/wiki/Puppy_Love?oldid=7692"
Community content is available under CC-BY-SA unless otherwise noted.