This article is about the character. Not to be confused with the level of the same name in the original video game.

Psy-Crow is also the reason for Jim's existence, since Psy-Crow accidentally dropped the Super Suit on Jim in the first place when transporting the Super Suit to Queen Slug-for-a-Butt. They then became rivals as they try to retrieve the suit back time and time again, whether it's a ransom or simply throwing him out of it like many others do.

Psy-Crow has made it his goal in life to destroy Jim and recover the Super Suit, or at least thwart him in any way he can, such as frequently kidnapping Jim's love interest Princess What's-Her-Name.

Psy-Crow is a mutated, talking, human-sized carrion scavenger with a pot belly, a taste for worm flesh, and maniacal tendencies. Psy-Crow has four fingers, opposable thumbs, and large, three-toed feet. Psy-Crow's wings have become modified into arms, and his stubby beak houses numerous jagged teeth. He has 3 tail feathers that are individually covered by the suit, though in the cartoon they are exposed, and he caw-caws like a crow - and flaps his arms like a crow's wings - when he is emotional or feeling pain. This suggests he was once capable of flight.

Psy-Crow wears a yellow jumpsuit with a utility belt, topped by the clear glass bubble of a space suit helmet. Psy-Crow attains flight by means of a very advanced jet-pack, that can enable even travel between planets in outer space. When facing Earthworm Jim, his signature weapon is his worm-hook grappling gun, with which he tries to pull Jim out of the Super Suit with.

In most materials, Psy-Crow is described as an intergalactic bounty hunter and mercenary-for-hire, most often offering his services to other nefarious villains such as Queen Slug-for-a-Butt, ruler of Insectika. Psy-Crow also often aligns with the most evil genius in the universe, Professor Monkey-For-A-Head, who may have created Psy-Crow, although this implied but not explicitly stated.

As his name implies, Psy-Crow is psychotic, and takes great pride in his job as a villanous creature. He is cunning, cruel and looks out for no one but himself. If the price is high enough, he is more than happy to do his job regardless of the moral implications. He gets his kicks from having access to such a massive array of arsenal and being feared throughout all the galaxies he roams.

Psy-Crow has featured as an enemy in every game of the video game series except Earthworm Jim: Menace 2 the Galaxy.

Psy-Crow can communicate with his crow brethren, ordering them to attack Jim in New Junk City, the first level of the original video game. Jim races against Psy-Crow on his Pocket Rocket in the asteroid chase levels, and Jim would have to fight him if Jim loses the race. However, Psy-Crow is only a minor character in the first game, and Queen Slug-for-a-Butt is the overall villain of the first game.

Psy-Crow became the main antagonist in Earthworm Jim 2, kidnapping and attempting to marry Jim's love interest Princess What's-Her-Name in a coup d'état of the universe. In the final level of the game, See Jim Run, Run Jim Run, Jim has to race Psy-Crow on foot to a marriage altar in a fast-track wedding chapel of the Lost Vegas System. Whoever gets there first marries the Princess.

Psy-Crow also showed up in Earthworm Jim 3D in a tank-like war machine, as Jim rode around on a pig, as the boss in the Memory area.

In the cartoon series, Psy-Crow was voiced by Jim Cummings, and his personality was fleshed out a bit more. He occasionally allies himself with Professor Monkey-For-A-Head, generally in service to the Queen but in at least one case in a successful attempt to take control of Insectika. The Queen eventually returned to dethrone the two of them, however. On at least one occasion, Psy-Crow grew tired of his bounty hunter profession and tried out other occupations, including a job that Jim said put him in the most horrible peril in all the universe: he became a gym teacher, and was fired for being too nice despite the fact that he chased children while shooting lasers at them. He soon decided that being a bounty hunter was indeed his chosen profession. In the episode "Hyper Psycrow", when the Great Worm Spirit (voiced by Doug TenNapel, the creator of Earthworm Jim) shows up after Psy-Crow and Jim destroy the universe, Psy-Crow claims to have been a veteran of the Vietnam War, explaining how he ended up meeting the spirit (who pulled him into a foxhole, thereby saving his life).

Being a crow persona to Jim's worm persona, Psy-Crow is generally regarded as Jim's primary nemesis, although he has yet to ever defeat him. This could be attributed to his general lack of intelligence and yet common sense, or the fact that he has poor hand-to-hand combat skills that make him less of a threat than adversaries such as Queen Slug-for-a-Butt or Evil the Cat. 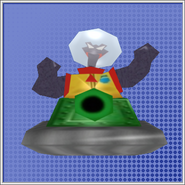 Psy-Crow in his new tank machine in Earthworm Jim 3D

Psy-Crow in the animated television series

Cartoon version in the 1995 TV Series

Psy-Crow action figure with his hook gun, and Major Mucus 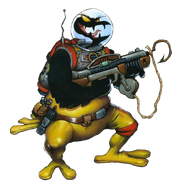 Drawing of Psy-Crow with Peter Puppy by Mike Dietz
Community content is available under CC-BY-SA unless otherwise noted.