Professor Monkey-For-A-Head is a recurring villain in the Earthworm Jim franchise and frequent enemy of Earthworm Jim. The Professor and his simian upper half have appeared in the video game series, the comic books, the toy line, and frequently on the animated television series.

Professor Monkey-For-A-Head is the mad scientist who invented the ultra-high-tech-indestructible-super-space-cyber-suit for Queen Slug-for-a-Butt. The Professor built it aboard his space laboratory, but then Psy-Crow lost the Suit in transit to the Queen, and it was recovered by Earthworm Jim.

As his name suggests, the Professor has a monkey grafted to his forehead. His simian skullmate, named Monkey Professor-For-A-Head, seems to have a mind of his own, as he often pesters the Professor with his jabbering, which the Professor can somehow understand. They share a single set of eyes, though they usually represent whatever the Professor is looking at.

Professor Monkey-for-a-Head is very short tempered and frequently bursts into screaming fits of frustration. His monkey is much more easygoing, and enjoys teasing and annoying him, usually at inopportune times. Despite their frequent squabbling, the Professor is highly defensive of his simian compatriot, and will threaten anybody who insults him.

According to the first game's instruction manual, it is because of the Monkey that Professor Monkey-For-A-Head cannot build another suit - the Monkey ate the plans. In the animated series, however, the Professor is unable to make a new suit - at least, not at the same strength levels as the original - due to not having a spare "Battery of the Gods" to power it with. For some reason, the Gods turned him into a bread maker when he tried to get a new one, which he comments as being "kind of handy" when he's hungry. (He can even make Pumpernickel by twisting the Monkey's tail.)

The Professor and his primate companion live in a lavish space station laboratory (Level 5), where they enjoy their many hobbies, including recreation, grooming, and gourmet cooking.

The Professor's other inventions include pay-toll toilets and atomic bananas.

It seems that grafting animals into one's head runs in the Professor's family, as in Earthworm Jim 3D, Jim met the Professor's late great aunt, Baroness Beaver-for-a-Head, who lost her beaver head, and Jim must bring it back to get a Golden Udder. Also, in the comic book mini-series, when the Professor attempts to take control of the suit, it runs amok and annoys him in various ways, including "marrying [his] gram-gram." His grandmother, seen in the background of that particular panel, also appears to have a monkey grafted to her head.

As with most of the other villains in the game, Professor Monkey-For-A-Head was a regular antagonist on the animated series, where he occasionally teamed up with Psy-Crow. His voice was provided by Charles Adler.

Professor Monkey-for-a-Head is a scientific genius with the amazing intellect to invent the most dangerous inventions(including Jim's super suit) as well as performing experiments on creatures.

With the monkey attached to his head, the mad scientist can easily make an escape with the use of the monkey's athletic agility and climbing.

The Professor remains largely identical to his original depiction in the animated series, with the exception of claiming to have been a simple dairy-farmer before grafting a monkey to his head and becoming an evil mad scientist afterwards. Also, the reason for the Professor being unable to create another super-suit has changed. In this series, the Professor is fully able to create as many super-suits as he wants, but it would be useless without a Battery-of-the-Gods, of which the Professor was only able to claim one of and said battery resides in the suit Jim possesses.

The Professor had attempted to retrieve another battery, but was thwarted by the Gods and turned into a human bread-maker as punishment. Now, when focusing, the Professor can produce warm, freshly baked bread from the confines of his lab-coat, and he can produce pumpernickel by cranking the monkey's tail.

The Professor is much more active in his attempts to reclaim the super-suit from Jim in this series, often attacking Jim personally with some new invention of his. He will even team up with other villains, such as Psy-Crow, in joint attempts to subdue Jim. 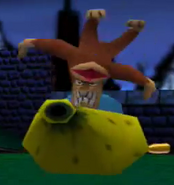 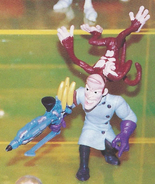 Old Photo of the Prefussor Monkey-For-A-Head Toy made by Playmates Co.
Community content is available under CC-BY-SA unless otherwise noted.
Advertisement