Princess What's-Her-Name is a supporting character and romantic interest of Earthworm Jim.

In the original Earthworm Jim video game, Princess What's-Her-Name (which is her actual name) appeared only briefly. In the ending scene, after defeating Queen Slug-for-a-Butt, Jim meets the Princess and instantly falls in love with her. She puckers up to kiss him, but as he approaches her, the cow that was launched in New Junk City lands on her (à la Monty Python and the Holy Grail), effectively crushing her. Jim leaves the scene, notably disappointed. A little while later, the ground under the Princess and the cow cracks, making them both fall into the red slime beneath. Jim then makes a final appearance and greedily snatches the Princess' crown, which fell off when the cow landed on her.

Originally, little was known about the Princess other than the fact that she enjoyed frivolous things such as "space cars", but she played a more important role in the game's sequel, Earthworm Jim 2. After being rescued from the slime pool and re-inflated by Jim, she finds herself impressed by his attempts to woo her (and, more importantly, his hefty bank account) and decides to fall in love with him. However, she is kidnapped by Psy-Crow, who desires to marry the Princess and use her royal status to become Ruler of the Universe. In the final stage of the game, Jim and Psy-Crow race each other to the altar to wed the Princess, with Psy-Crow ultimately losing.

Within the animated series, Princess What's-Her-Name was born the twin sister of Queen Slug-for-a-Butt. But unlike her beautiful sister, the Princess was born hideously malformed, having pink skin, large eyes and long red hair (Insectikan standards of beauty being different from those of humans). Because of this, she was kept locked away for many years by the royal family and never given a name, being referred to only as "the ugly one" or "What's-Her-Name". She eventually escaped the castle and became the leader of the rebellion against the Insectikan monarchy and her tyrannical sister. This Princess was a far less vacuous character, having more in common with Xena and similarly amazonian figures.

Throughout the cartoon series, her relationship with Jim was more or less a professional one. Jim appeared to be harboring the delusion that they were boyfriend and girlfriend, although the Princess appeared to be oblivious to his advances. A running gag throughout most of the cartoon series was that whenever any character asked what Jim meant by "relationship", Jim would give a hearty, if condescending laugh. She was also rather dismissive of Earth in general, noting in one episode that it contained no intelligent life. However, during the second season the Princess did appear to soften to Jim; she was apparently not above being wooed in one episode by Evil Jim, who is a more pragmatic version of his good counterpart.

In the graphic novel, "Launch the Cow," What's-Her-Name is now the daughter of Slug for a Butt.

Princess offers Jim a kiss and a reward

A Cow Falls on the Princess 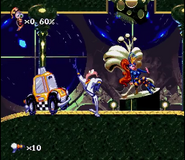 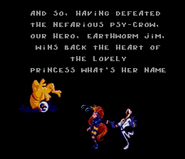 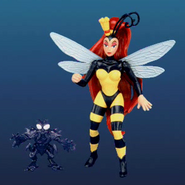