The Pocket Rocket is a single-person spacecraft and Earthworm Jim's main mode of transportation, whether to other planets or new locations.

The Pocket Rocket has appeared in the video game series, the animated television series, the comic books and toy line.

The Pocket Rocket is a small personal rocket ship stored inside the Super Suit and looks like a turbine engine with handle bars. Whenever Jim needs it, it is pulled from one of the suit's pockets, hence the name. It is unknown how the rocket fits inside the suit, as it is much bigger, but it is assumed that it fits into some sort of extra-dimensional space. The rocket, like the Super Suit, was created by Professor Monkey-For-A-Head for use by Queen Slug-for-a-Butt, but was lost along with the suit by Psy-Crow to Earthworm Jim.

While on the rocket, Jim seems to have no problem breathing in the cold vacuum of space, even though the Pocket Rocket is not enclosed in any way. This may be due to either the rocket, Jim's Super Suit or just Jim's earthworm physiology. However, in the animated series Peter Puppy can also be seen riding the rocket in space with no ill effects, so it can be assumed the rocket supplies some sort of life support systems or that it is just an example of cartoon physics.

The Pocket Rocket seems to be as durable as the Super Suit itself, as it continues to function even after being battered by asteroids, exposed to the extreme heat of planetary re-entry, and operated underwater.

In the line of Earthworm Jim toys, the Pocket Rocket was the only vehicle ever produced.

Jim's victory dance on the Pocket Rocket after winning the race

Battling Major Mucus at the end of the "The Flyin' King", Earthworm Jim 2 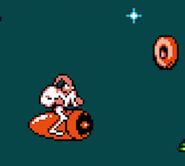 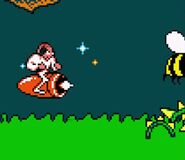 Firing plasma from the front turbine

Jim, Peter Puppy and Snott on the Pocket Rocket (animated television series)
Add a photo to this gallery
Retrieved from "https://earthwormjim.fandom.com/wiki/Pocket_Rocket?oldid=6848"
Community content is available under CC-BY-SA unless otherwise noted.