Peter Puppy is quite timid by nature and has a hard time controlling his transformations. He can often be heard chanting to himself, "I must not fear, fear is the mind killer, fear is the little death that brings total oblivion" (a modified litany against fear, from Frank Herbert's Dune series). Despite his cowardice, Peter is always willing to accompany Jim on his adventures, acting as Jim's consultant when Jim goes astray, as well as providing him with moral support. Whilst Peter does have a kind of hero worship for Jim, he does often point out certain inconsistencies of Jim's, like when Jim called Peter a kettledrum, which Peter takes as an insult on his weight; or Jim's ability to use aromatherapy despite having no nose. This invariably makes Jim say, "Don't question me" in a threatening tone of voice. 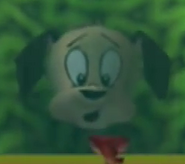 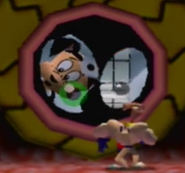 Drawing of Peter with Psy-Crow by Mike Dietz
Add a photo to this gallery
Retrieved from "https://earthwormjim.fandom.com/wiki/Peter_Puppy?oldid=7777"
Community content is available under CC-BY-SA unless otherwise noted.