Henchrat is an enemy of Earthworm Jim, and is a large, mutated rat with glowing red eyes, often wearing bulky armor, and in the service of Evil the Cat.

Henchrat did not appear in the earlier video games, where Evil the Cat has the Shadow Demons and Lawyers of Heck as minions.

Henchrat was created for the animated television series. In the cartoon, Henchrat is voiced by John Kassir and serves as Evil the Cat's "mindless rodent lackey" (as Evil often calls him).

A Henchrat action figure was also included in the toy line.

Contrary to his savage occupation, Henchrat likes to watch mimes, takes self-actualization courses, and hopes to one day open a macramé shop. He always responds to Evil's abuse by saying "Thank you". 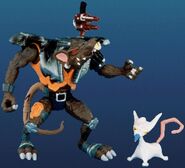