Fifi is a hostile character encountered by Earthworm Jim in New Junk City, the first level of the original video game. The game manuals describe Fifi as the rabid female pet poodle-bulldog of the owner of the giant junkyard, Chuck, who is also the boss at the end of the level. Fifi is described as a "psychotic, four-legged chainsaw with a rusty chain."

Fifi will attack by running straight at Jim, pulling him down off wires and ledges, or jumping up and biting and mauling his super suit. Helpfully, Fifi will hemorrhage atom balls when taking damage. When killed, Fifi will whimper and explode, causing eyeballs and bones to fly everywhere. 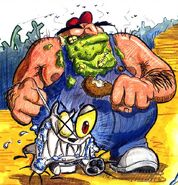 A Fifi in Earthworm Jim HD 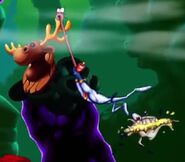 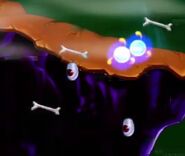 A Fifi exploding into eyeballs, bones and atoms
Add a photo to this gallery
Retrieved from "https://earthwormjim.fandom.com/wiki/Fifi?oldid=7661"
Community content is available under CC-BY-SA unless otherwise noted.