Overall, he greatly resembles the good Peter, albeit a lot more vicious-looking and maniacal.

His fur is a dim, earthy gray and is quite unkempt, with scruff on his chin, looking like a beard. He possesses sharp, carnivorous teeth and claws, eyes with green sclera, as well as green gums and tongue. He possesses the same black ears, oddly enough with pink inside instead of green (but, it is Earthworm Jim we're talking about here, we threw realism out the window a long time ago). His attire consists of the same outfit as Good Peter, albeit with a slightly lighter blue shirt.

His beast form is near identical to Good Peter's, with the main differences being his green sclera, green gums and green tongue, as well as his fir being purple instead of red. Additionally, when transforming, Evil Peter does not rip the sleeves of his shirt.

Similarly to Evil Jim, Evil Peter is the complete polar opposite of Peter Puppy in all aspects, from his personality, right down to the most minute likes and dislikes. Where Peter is often kind and cordial, Evil Peter is mean-spirited, rude and impatient. He revels in doing bad things, unlike Peter, who has always been a proponent of justice. However, despite being mostly different, his transformation is triggered via similar stimuli to that of his counterpart. It's been explicitly noted that he enjoys Haggis, a Celtic dish that is basically a stuffed sheep stomach, which Good Peter expresses vehement distaste for, similar to Evil Jim enjoying orange juice after brushing his teeth, and disliking ice cream.

His beast form, as opposed to Good Peter's, is very friendly and righteous, full and willing to turn against his evil allies, and even help to pacify Good Peter's beast form. 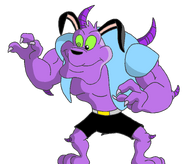 Add a photo to this gallery
Retrieved from "https://earthwormjim.fandom.com/wiki/Evil_Peter?oldid=7656"
Community content is available under CC-BY-SA unless otherwise noted.