This article is about the character. Not to be confused with the original video game, the video game series, or the animated television series.

Earthworm Jim is the protagonist of the Earthworm Jim video game series, the action figure line, the comic book mini-series, and the animated television series which ran for two seasons.

For most of his life, Jim was just a generic earthworm engaging in normal worm activities, such as digging in dirt, crawling, and fleeing from hungry birds, until one day wherein fate should happen to smile upon him and his life was changed forever. A fearsome bounty hunter named Psy-Crow was en route to deliver the "ultra-high-tech-indestructible-super-space-cyber-suit" to Queen Slug-for-a-Butt, but got in a confrontation with another spaceship and lost the suit out of an airlock. The suit fell to earth, landing on a farm somewhere in the southern United States. While fleeing from a flock of hungry crows Jim took refuge in the mysterious suit. The suit's powerful atomic particles affected Jim's wormy flesh and caused him to grow and evolve at a fantastic rate. Upon discovering his new-found powers granted by the suit, he overhears Psy-Crow talking to Queen Slug-For-A-Butt, and becomes interested in meeting the queen's twin sister, Princess What's-Her-Name, setting up the events of the first game. It's said that while inside the suit, he is 5'8" and weighs 154 lbs.

Throughout the games, Jim travels to many planets and faces many villains who are after the suit. In Earthworm Jim 2, Jim must rescue Princess What's-Her-Name when she is kidnapped by Psy-Crow. In the television show, Jim (voiced by Dan Castellaneta) has an almost identical origin, but now resides in a home in the city of Terlawk (a play on Turlock, California, the birthplace of Douglas TenNapel) with Peter Puppy. Most of the villains from the game still show up from time to time to give him trouble.

Jim can be a bit naive, is somewhat of a degenerate and rarely thinks before rushing into battle, but on occasions can be very cunning. Jim is also very gullible, even trusting villains in not-so-convincing disguises. His motto is "When all else fails, start blasting!" Jim has a rather large romantic infatuation with Princess What's-Her-Name, which usually confuses her in the cartoons, but he never falters in his resolve. Jim also appears to be childish, enjoying pop-up books, snow globes, and other childish things. In the games, Jim has a slight southern drawl and says phrases like "Groovy!" or "Whoa, Nelly!". In the animated series his drawl has all but disappeared, but he still retains his "Groovy!" catchphrase.

Jim has a tendency to use big words and long drawn-out phrases. It is not uncommon for him to yell something like "We are all doomed! From the Middle English meaning 'condemned to ruination or death'! DOOOOMED!!" or "By the Great Worm Spirit, whose mighty bristles strike the hammer-blows of justice". His battle cry is "Eat dirt, (persons or things in question)!", which he usually follows up by laughing maniacally. This too can become long and drawn-out with phrases like "Eat dirt, everyone in the vicinity!" or "Eat dirt, evil banana-suited doofus!"

To battle evildoers, Jim primarily relies on his Super Suit, which grants him superior strength, durability, and the ability to do many things a worm could not normally do due to a lack of limbs. His main weapon is a rapid-fire Plasma Blaster, which can also fire massive and powerful beams (with a power-up collected).

Many of Jim's signature abilities, however, are not due to the Super Suit itself, but to his own long, stretchy worm body. For instance, he can use himself as a whip to attack enemies at close and mid-range, or as a lasso to grab onto small ledges and swing off of them, giving him unparalleled mobility. He is even known to use his body as a propeller, slowing down his fall. While he is quite vulnerable and weak if separated from his suit, he still has access to various abilities a regular earthworm would not have - such as coiling himself into a spring and jumping. 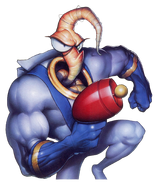 Jim in the intro

Jim on the Mega Drive boxart of the original game

Running in the cancelled PSP game 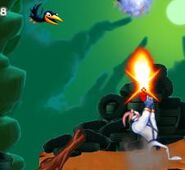 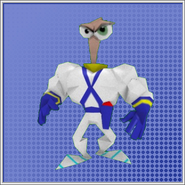 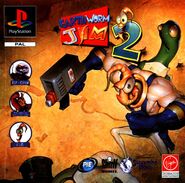 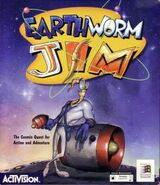 Jim on boxart for the PC version of the original game

Jim in the cartoon show 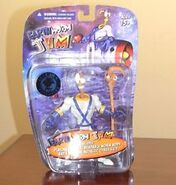 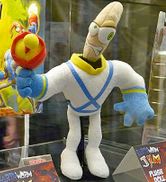 One Frame Of Earthworm Jim's Sprite From ClayFighter Sculptor's Cut & 63 1/3
Community content is available under CC-BY-SA unless otherwise noted.
Advertisement