Bob the Killer Goldfish is featured as a boss in all three of the console games. Bob, being just a goldfish, rides around in a small glass bowl and gets his feline minions, particularly Number Four, to do all the work for him. In the cartoon series, his home planet is La Planeta de Agua (Arriba!) and he wants Earthworm Jim's Super Suit so that he can have legs, as well as "a nice, big, juicy worm soup to eat."

Bob himself doesn't put up much of a fight. In Earthworm Jim, Jim simply knocks his bowl off a table and leaves him to flop around on the floor as Jim exits the level. In Earthworm Jim 2, in a parody of video game boss encounters, Bob is introduced with much drama in what appears to be a pre-boss-battle cutscene (including a Mortal Kombat-style "Fight!" message), only to have Jim suddenly pluck him from his bowl and eat him. In Earthworm Jim 3D, Bob and Number Four appear in a boss fight at the end of the fourth world, which has a cowboy theme. This boss fight involves retrieving Jim's marbles and stealing them from Bob. It is often agreed amongst fans that this is the easiest boss battle in the game, just like the Bob the Goldfish fights in previous games (although in Earthworm Jim: Menace 2 the Galaxy he's more serious).

In the first game, Number Four and several other cat guards wander Bob's stage, and will clobber Jim senseless if they get a hold of him.

In the television series, Bob has a deep southern drawl. Bob also focuses his attention on universal conquest and spends much of his time attempting to convince the fish of La Planeta de Agua (Arriba!) to embark on a destructive rampage, usually to no avail. On several occasions, Bob has attempted to take over the universe without help, and at one point did succeed in conquering Earth by hyper-evolving himself into another life-form. However, his evolutionary accelerator soon returned him to his original fish form (as fish turned out to be, in Bob's words, "the highest form of life"), and he was forced to attempt a retreat. Bob's dialogue, especially when attempting to inspire his fellow fish to "[Go forth and] Destroy! Destroy! DESTROY!", is often backed by slow instrumental gospel music, and his bombastic voice and Southern accent make him sound much like a televangelist. 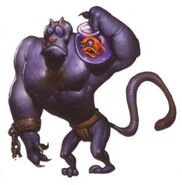 Artwork of Bob and Number Four 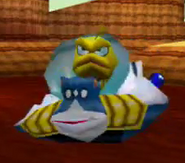