Battery of the Gods

One of the main plot points of the animated series in Episode "Assault And Battery", the Battery of the Gods is a power source created by the gods with almost limitless power. It was used by Professor Monkey-For-A-Head to power the Super Suit. When the original suit was lost, the Professor was unable to build a suit with the same level of power without another Battery of the Gods.

Since the only place to get one is the Fabled, Long-Sought Home of the Gods, very few people have access to them. Earthworm Jim was aided in his quest for a new battery by The Fabled, Long-Sought Phonebook of the Gods, where the gods granted him a new battery after seeing his skill and playing the nose flute. The battery itself looks like a large 9-volt battery with an orange wrapper.

The Battery of the Gods was planned to be a power-up for the cancelled game Earthworm Jim PSP. 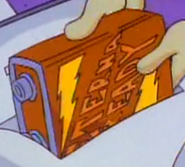